Botox is a refined type of the botulinum toxin obtained from the bacterium. In spite of the fact that this toxin is fatal if it is used in large amounts, but if a very small amounts is used to smooth the skin wrinkles, it will not have any dangers and it has been used for dozens of years to smooth the skin.
Botox prevents transferring the nerve signals in the injection part, consequently the muscles of that part will die over time and without the movement of these muscles, the face wrinkles will be decreased or eliminated.

How Long the Botox Will Last?

How Botox Injections Can Eliminate the Wrinkles?

All the face movements including the emotional and sensitive movements of the face are provided by the muscles which are exactly under the skin. The excessive activity and contraction of these muscles provides some lines in the face. Botox temporarily stops the activities of these muscles.

Which Parts of the Body Are Excessively Injected by Botox?

The most suitable place for injecting the Botox is the forehead. By injecting in this part, it is possible to eliminate the deep lines created between two eyebrows which are called the frown line and also, the transverse lines of the forehead. The injection can also be utilized to remove the lines under the eyes, around the lip, the laughing line and the line under and corners of the lip, but it should be done at a low dosage by a very expert person because the presence of side effects in these points is in a high possibility, additionally the fine lines around the eye can also be injected. If the patient choice and the injection method are accurate, the results will be more satisfied and successful for these points.

Is That Possible to Use Botox Injection in the Forehead to Lift the Eyebrows?

Yes, if the injection is provided in a specific way, the edges of the eyebrows will lift, but this method is useful for many people especially women.

When the Botox Injection is Forbidden?

1- People who have allergy to this medicine
2- Those people who have the infectious and inflammatory diseases in the face and around it.
3- Pregnancy and breastfeeding
4- Having some neurological and mental diseases
5- Using some medicines especially the heart medicines
6- People who have very thick skins or deep wrinkles, they will not get better results.

Does the Age and Gender Have Influences on the Effectiveness of Botox?

No, it is allowed to be used at the ages older than 20 years (for cosmetic) and man and woman can use it. Its effect on different people is also the same. Only a small group of people are immune to this medicine and it does not have effects on them which is not related to the age and gender.

Side Effects of Botox

Fortunately, the general side effects such as poisoning or allergies are very uncommon, only some people complain about their swoon which will improve during 3 to 4 days.
There are many topical side effects. Inflation, bruise and ecchymosis can be sometimes observed which will improve until one weak.
The most important side effects of Botox are related to three things: excessive injection, improper injection and releasing the medicine to around parts which is unpredictable.
Consequently, the muscles will be either too weak or the muscles around them will not move.
Their symptoms in the forehead and around the eyes are consisted of drooping the eyebrows and nose and drooping the eyelid and around the mouth, two corners of the mouth will be drooped and having some problems in eating can be another problem and in the neck, if it is deeply injected, there will be some problems in the ingestion and sound.

Sometimes, the asymmetry on both sides of the face may happen because of the injection inequality or a difference in the absorption, for example the eyebrow on one side will be upper than the other side.
It should be considered that all these side effects are temporary and they will be better after 2 to 3 months.

If the Botox Injection is Stopped, the Skin Will Not Have Excessive Dropping?

No, this problem will not happen and after finishing the medicine effect, the muscles will slowly unclench and they will return to their original state, but the excessive drooping will not happen.

Is That Possible to Use Botox for all Areas of the Face? 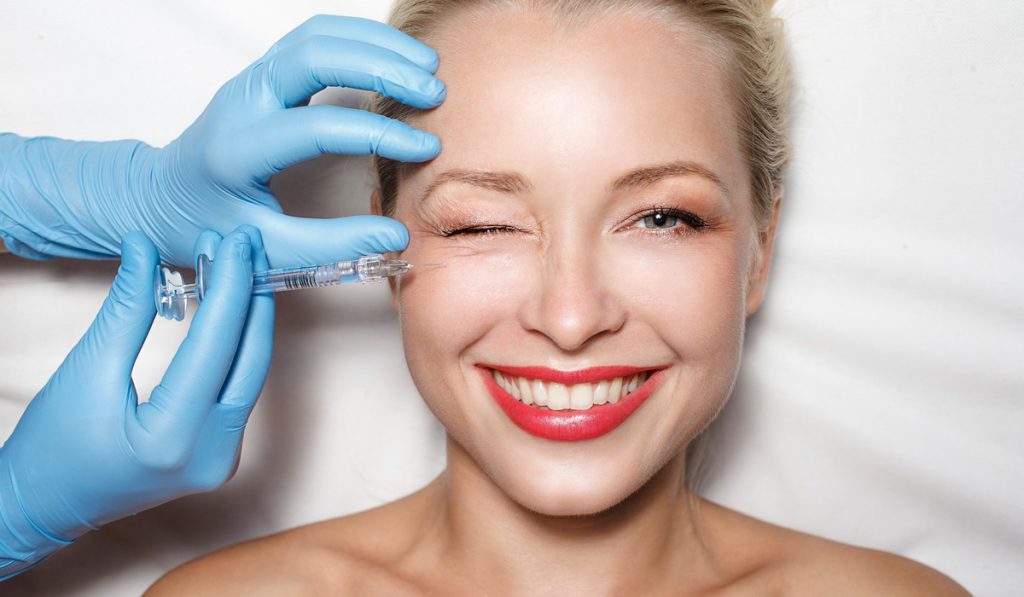 After Injecting the Botox, What Should Be Followed?
For getting better results, it is recommended to the patient to play with the face muscles between 1 and 3 hours (to gather the muscles and open them, but never massage the injection part) and the patient is not supposed to keep the face down up to 4 hours.
At nights, it is better to sleep in a way that there is something under the head and the head is upper.
Two weeks after the injection, you are supposed to see your doctor gain for retouching.
If it is required, the presence of any defections can be corrected or if it is not functional in the injected parts, the modification or reinjection will be provided.
The puffy eyelids are normal in some people especially those who are using the Botox for the first time and it will improve after a few weeks.

Rarely, some allergies especially in the middle-aged and aged women are observed in the retouch injections especially in the first or second injection in the form of severe inflation in the forehead and around the eyes that in spite of having a horrible appearance, they will be quickly eliminated by the considerations of an expert doctor and there is no need to be concern.
In conclusion, Botox can completely make better more than 90% of the wrinkles and only 10% of the wrinkles are remained which can be treated with the help of other methods such as the gel injection or using the skin rejuvenation methods and practically without using Botox, eliminating the wrinkles even with the help of the best methods and creams will provide ineffective results.